The changing times of Tile Adhesive 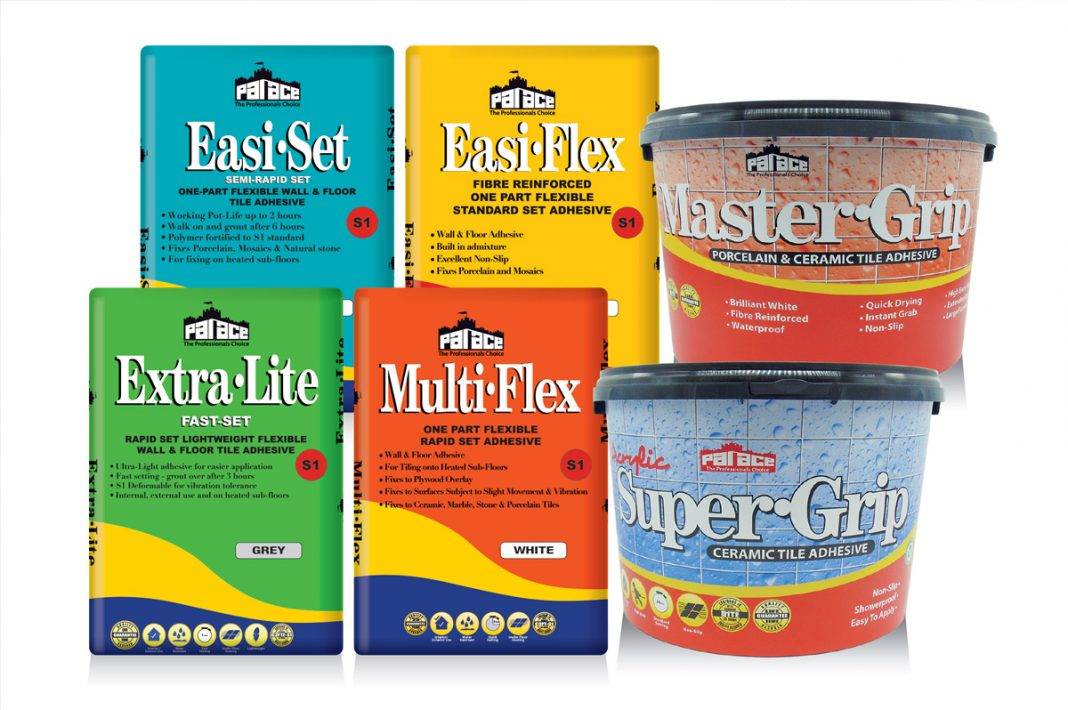 Over the last five decades, the use of Tile Adhesive has changed significantly. Palace Chemicals has been in a unique position over that time period and, in this article, looks back at the changing times of Tile Adhesive.

A nyone that knows a bit of industry history, will be aware that for so long, sand and cement was used to fix the massive array of 4¼ or 6” tiles in their garish colours to rendered walls in almost EVERY building in the UK.

In the late 60s, Ready Mixed Tile adhesive was introduced as one of the first products in the market to overcome the new ‘fad’ of wall surfaces in the form of skimmed gypsum plaster & plasterboard.

In the late 70s early 80s, the feedback from the market was that more robust products were required to suit the needs of the fixers, so Palace Chemicals was instrumental in the technology of the ‘D1’ Tile Adhesive with Palace Goldfix and Super-Grip. Both have remained a staple of the tiling community to this day, with millions upon millions of buckets sold!

With the use of Ready Mixed adhesives becoming an easy option for most wall substrates, attention then turned to bathrooms and the requirement to have a more flexible option that was robust enough to use around baths (and for the posh households of the times, the over bath showers – Bath tap fed of course)!

Trends quickly progressed to the D2 adhesive, which fitted these requirements perfectly. Palace brought Aquatile and Aquafix to the market. These new adhesives were also suitable to use with the newly fashioned 8 by 6” tiles that were coming from Spain, Portugal and Turkey.

The Ready for Use market continued to thrive through the 80s and 90s, with technology moving focus to floor tiling as the products of the day were either standard C1 adhesives with a latex additive or the new and improved C2 adhesive, which saw the use of powdered polymer taking away the need for the ‘Bag & Bottle’ approach.

These products were also great for use with the evolving trend of Marble. They even wanted to put them on the walls. Who in their right mind would put a floor tile on the wall?

In the late 90s and early 00s, Porcelain tiles started hitting the scene. They too were being used on walls, which then started causing issues with the Ready for Use adhesives as these were not suitable (and still aren’t) for use with a porcelain tile over 150mm2.

At the same time, Plywood was a popular choice for floor overlays, so the C2 adhesive was starting to be tested to its limits. What with vibration, movement and expansion / contraction, it was time to introduce the ‘S’ classes!

The differences between the S1 & S2 adhesives gave enough distinction to ensure these were used for their intended purposes. Although some people still think that an S2 adhesive is better than an S1; but this isn’t the case. It is wholly dependent on the location of the application and type of substrate.

The S2 was again first served as a ‘Bag & Bottle’, which was great for site work where the there was a lack of running water but was quickly developed into the single component water mix, we know and love today.

More recently, in the late 10s and 20s, we as a community are changing the way we are tiling – no more plywood and the introduction of backer boards, requirements for tanking new and refurbished properties for example. But we are also looking at further advances (and diversification) not only into more environmentally friendly product ranges, like the Palace Extra-Lite range that offers 40% recycled material and a high yield that covers the same m2 as a 20kg bag for half the weight, but also taking living spaces to the outside of the property – The garden!

People thought it crazy to put floor tiles on walls a few years ago; now we are putting them in our garden! But this also brings in that diversification and further advances of what a tile adhesive can do.

So, what’s next? S3s, self-heating adhesive … well that would be telling! But a big shout out and congratulations needs to go out to chemists at all the adhesive manufacturers who have managed to keep up with the changing times and classification requirements of all tiles and respective adhesives.

Not least Palace Chemicals, who have not only managed to introduce their products in line with the tile trends throughout these times, but to also try to keep one step ahead of the market with looking for new technologies.

Let’s face it, it’s always good to be ahead of the competition – (70s – Palace Super-Grip; 80s – Palace Aqua-Tile, Trade-Flex; 90s – Palace Easi-Flex, Master-Grip; 00s – Palace Multi-Flex, Super-Flex 2-part; 10s – Palace Super-Flex Single Part, etc) and these are just to name a few! But this is what makes Palace Chemicals Ltd the largest manufacturer in the UK!