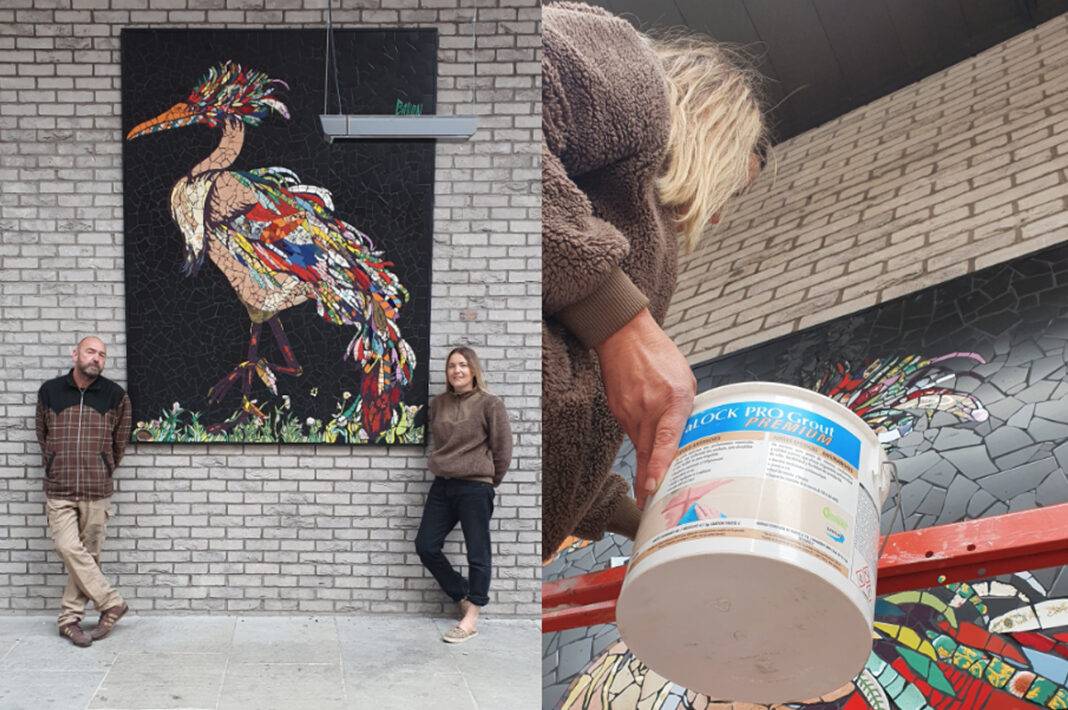 Products supplied by Palace Chemicals and Laticrete UK have helped to create a replacement artwork that celebrates 2015’s The Guardian of Ancoats by Mateus Bailon. TSJ reports.

A colourfully painted mural, dubbed The Guardian of Ancoats, became a much-loved landmark during its relatively short existence.

It was completed by Brazilian artist Mateus Bailon on the side of an electricity substation in Manchester in 2015; but sadly disappeared when the substation was demolished for redevelopment a couple of years later.

Now, products supplied by Palace Chemicals and Laticrete UK have helped to create a replacement artwork that celebrates the famous bird and, given that the new Ancoats Guardian is depicted in mosaic form, it is set to last for many more years than the original.

It was commissioned by property development firm Anco & Co, who had been impressed by a smaller mosaic study of The Guardian of Ancoats, that Mark had produced two years earlier.

The latest version takes pride of place on the side façade of the new Mule Café and Cocktail Bar in Blossom Street; one of the commercial units that forms the ground floor of Anco & Co’s new development of luxury apartments.

“My earlier study piece was seen by the people who were developing this building,” said Mark. “The guy who commissioned it was a big fan of the original work by Mateus Bailon. I also know that Mateus was a fan of the original study, so I’m sure he won’t object to his work being celebrated in this way”

Mark (56) is Manchester through-and-through and has been well known in the Ancoats area for many years. He is also the artist behind more than a dozen celebrated mosaics for his lifelong football club, Manchester City, which has even gained him some international acclaim such as tributes to Manchester City goalkeeper Joe Hart, ex-skipper Vincent Kompany and record goal-scorer Sergio Aguero. His most widely recognised work was a mosaic of Manchester City’s team shirt – which was used as inspiration by Puma to design the Sky Blues’ 2020/21 home kit.

This latest artwork was created and assembled in three pieces, using a foam core cement board backing. Creating the brightly coloured bird on its black background, were a variety of tile and plate materials that were affixed to the boards.

This is the part where Mark was confident of the outcome. He used PALACE Grab & Fix MS polymer adhesive as it has proven to be the best in terms of high strength and reliability. The adhesive is solvent free and cures quickly, as well as being water and weather proof.

Equally as durable is Mark’s go-to choice of grout, which is the LATICRETE SPECTRALOCK PRO PREMIUM Grout, of which he used the Midnight Black version for his Ancoats Guardian. It is a patented, high-performance epoxy grout that provides excellent colour uniformity, durability and stain protection in an easy-to-use, non-sag 3-part formula. It can be used on both interior & exterior floors and walls and is a common choice for swimming pools, fountains and other wet or hygienic area applications.

“I can’t fault either of these products,” said Mark. “They’re just amazing to work with and they have never let me down. Hats off to the guys at Palace and Laticrete UK”.

Mark has described his latest mosaic as ‘sensationally personalised’ and not just because he has dedicated to his mum, Maureen Kennedy.

Mark incorporated a broken coffee cup into the piece for example – one which had originally been given to his fellow-artist Mary and had the words ‘If it wasn’t for the sun, there wouldn’t be any shadows’ printed on it.

He has also included lyrics from songs by Manchester post-punk band The Fall, whose lead singer Mark E Smith (a close friend of Mark) who died in 2018 aged 60.

Mark had also managed to retrieve most of the bathroom tiles from Mark E Smith’s old home after the new owner discarded them in a skip while renovating the property.

“Some of Mark’s bathroom tiles now form part of the Ancoats Guardian piece”, said Mark. “Given his connection to the area, I think he’d be pretty ok about that – It’s quite fitting really. This is the most personalised mosaic I have ever done”.

Charles Clapham, Managing Director of Palace Chemicals said “It is so incredibly rewarding to see Mark’s iconic works of art gain such a following and such traction. We are proud to support him with our products and delighted to play even a small part in his success. Palace and Laticrete UK products are continually being improved so that they maintain their position as the leading brands for artists, DIY’ers and trade professionals alike”.